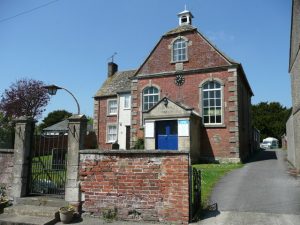 THE CHAPEL OF THE TOLLING BELL

The society has recently been handed the records of this chapel. Now maybe the time to learn something of its history. The chapel bears the date 1777 clearly on the front of the building. The building was erected as an Independent chapel. The builder was Isaac Turner of Calne.

Bradenstoke is the only Strict Baptist Chapel in England with a bell.In living memory this bell was rung to call people to worship.Connected to the bell is the chapel clock. In 1928 the villagers started a public subscription to have the clock repaired. Some time ago, it went wrong and the bell sounded throughout the night!

John Cennick (1718-55) preached in many areas of Wiltshire during the eighteenth century. He was known as the ‘Apostle of Wiltshire’. During his outdoor preaching in the county it is recorded that he was attacked, beaten, thrown in a pond and had dead dogs thrown at him, but during his life God was to use his preaching mightily, to the salvation of souls.

The Centenary of the building was marked on 1st May 1877 when IsaacSpencer of Bradford on Avon preached to large congregations in theGreat Barn of Bradenstoke abbey. Later ministers included Paul Robbins,Seymour Farmer, Edward Carr, William and Clement Wileman.

By 1926 the chapel was in need of a thorough renovation. The following year a weekly prayer meeting began seeking the Lord’s direction to fulfil this aim. The need became known for financial aid towards this and by May 1928 when the work began £500 had been given; from this aFirst World War hut was obtained to hold the services in. Later this was moved to the rear of the chapel for a schoolroom. The chapel interior was renovated with a new lower pulpit, new pews and heating.

August Bank Holiday 6th August 1928 was the date of the re-opening services. At the time of the renovation it was agreed that a baptistry should be built in the chapel, previous to this baptisms were conducted in a pond near Bradenstoke abbey called Adam’s Dam. The first baptisms in the chapel were conducted by Clement Wileman in June 1929. By August1930 £ 850 5s 4d had been received towards the renovations which meant that the chapel was free from debt.

Following the re-opening, August Bank Holiday was to become the day ofBradenstoke anniversary each year up to 1995, The centenary of the formation of the church was marked in August 1943, The preacher was S.R. Hunt of Bedford and it is recorded that about fifty adults and fifteen children sat down to tea, needing three quarts of milk to supply the tea!

James Payne of Brighton will be remembered as the anniversary preacher for many years, He came every year from 1946 to 1970 with the exception of 1949 when he was ill, and Pastors Mockford (Devizes) and Cook(Trowbridge) preached.

The bi-centenary of the building was celebrated in 1977. The building was improved, the clock was entirely renovated and new front doors were installed. An outing was made to Windsor Wildlife Park on 2 July. A lecture by Robert Oliver took place in June. Pastor K, F. T. Matrunolaof Portsmouth preached at two services on Bank Holiday Monday with the chapel full for both meetings.

In 1990 the church book records ‘Seven members have recently left the church- leaving the church with four ‘active* members,’ two of whom were ladies over the age of eighty! It seemed as if the doors were closing at Bradenstoke, However, in 1991 the invitation to become the first ever pastor of the church was extended to Mr Adrian Heath, who accepted the call. The induction service was held on 21 March 1992 with a crowded chapel and chairs brought into the aisle. Tea was lovingly provided by friends from Trowbridge. The service was conducted byPastor Jarvis of Calne and the speakers were P. Grist and P.Kilmister.’ Pastor Heath resigned in August 1994.

The church book continues: ‘21 February 1996. Sadly we record the home call of Bob Kilmister …as senior deacon for many years he and his wife Margaret have faithfully supported the work here for over 40years.’ Bob and Margaret’s son David then ran the services on a temporary basis. After twelve months of maintaining regular Sunday services ‘no clear leading from the Lord has come regarding the future of the chapel.’ With the agreement of the remaining small congregation the decision was taken to terminate the service and close the chapel at the same time keeping an open mind before the Lord for the future.Peter Cooke from Swindon conducted the last service on Sunday 16thMarch. That is the conclusion of the witness of the StrictBaptist Church at Bradenstoke. One hundred and forty-one members are recorded in the church book during the years 1843-1997.

However, the building re-opened for worship in October 1998. A witness is still maintained and a recent visit to Bradenstoke showed how the building has been considerably renovated during the last few years.