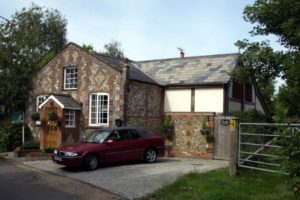 Buckland Common Strict Baptist ChapelThe Buckland Common Strict Baptist Church was started by Mr. James Clark of Tring. James Clark was born in Tring in 1841. He had a Christian conversion experience in 1858 and he was baptised and joined Frogmore Street Baptist Church in Tring. After that he became a local preacher to local villages. One day he and a friend felt a desire to go to Buckland Common. He knocked at the door of a cottage where they found a sick woman. She hailed them as God’s messengers sent to answer her prayer. When he visited again a few weeks later he found a group of people who urged him to conduct a service. This led to a room being offered for services, and someone offered to make some stools for people to sit upon. When Mr Clark went the next time the room was full, and from then he held weekly services.

After considerable opposition by the vicar of the adjacent parish, the Baptists bought a plot of land nearby in Parrott’s Lane and built a flint and brick chapel to seat 150 people. Its first service was in August 1860 and the Church was formally started in November 1860. It was a Strict Baptist Church. Later the land at the rear was used as a burial ground. The Baptist and Anglican chapels were about 100 yards apart, with the Baptist graveyard backing onto the side of the Anglican chapel.

James Clark of Tring, was made the Baptist’s first pastor in November 1860, aged just 19 years old. Every Sunday he walked from Tring to take its three services. His farewell service was at Buckland Common on Tuesday 7th January 1862, after which he entered full-time ministry in other Baptist Churches (see below) until shortly before his death. He died in 1909.

In 1909 Buckland Common Baptist Church had 10 members, but had 70 children in the Sunday School taught by 6 teachers. It also had 5 local preachers. The Church Secretary was Mr Absalom Turner. Prominent families in the chapel included the Turner, Fulks, Brown, Crawley and Butcher families from Buckland Common, Chartridge and Cholesbury. There were 3 plaques in the chapel with one to Absalom Turner behind the pulpit and two others on the side walls to Henry Brown and Mr Crawley.

During the Second World War the army used the field opposite, called No Man’s Land, to park its lorries and Bren-gun carriers and often soldiers slept overnight in the chapel.

After the war there was a weekly Sunday School at 2:45pm, which also had a popular annual trip to the seaside. The chapel had weekly evening services run by local preachers, many of whom would walk up from Chesham. Latterly the Church was overseen by Akeman Street Church in Tring.

In 1977 there was an outdoor united service on Buckland Common for all the churches of Cholesbury-cum-St Leonard’s parish, to celebrate the Queen’s Silver Jubilee.

In the late 1980s the chapel was closed and sold. It was converted to a private dwelling and is now called “The Chapel House”. A porch and a large extension were added in 2002. The graveyard at the back was separated off and is still used, accessible by a small pathway at the side of the house. It is now in the care of the Grace Baptist Association in London.

Thanks to David Woodruff of the Strict Baptist Historical Society in Dunstable, and to the Fulks family.