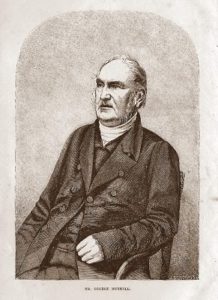 Tuesday 22nd May 1860 was a day that St. Neots in Cambridgeshire was to remember for many years to come. For that was the day when George Murrell, aged seventy-six years old, celebrated his fifty years in the pastorate at the Baptist Chapel in St. Neots. It was a grand occasion. People came from miles around and a special train was chartered from London which brought nearly four hundred friends and admirers of Murrell, including Baptist ministers. Most of the shops in the town closed for the day and the whole place’assumed an appearance of gaity and pleasure’.1 Both men and women came dressed in their very best clothes.

The special Jubilee meetings were held in a large marquee,belonging to the Norfolk and Suffolk Association (of Baptist Churches),erected in a field near to the Meeting House (as the chapel building was then called).A further three larger marquees were also erected in the same field for eating dinner and tea. In these tents were arranged twenty-four immense tables running the whole length of the marquee. On the tables were set huge joints of roast beef, veal, mutton and other meats; salads and all the trimmings. It was said that 1,000 Ibs [453.59kg] of various meats had been supplied. The catering was done by a Mrs. Taylor of the Cross Keys Hotel

Over the entrance to the ground and facing the entrance of the large marquees was a floral display in evergreens, lilac and other shrubs and plants, and in the centre arranged in various coloured roses the words ‘THE YEAR OF JUBILEE 1860’ Inside the marquees, at the end where a table went from side to side for the ministers and their friends, were a further three floral displays in oval medallions hanging from the pillars supporting the tent. These displays were simple but effective.  In one were the words ‘Jubilee I860’, in the second ‘This is a day much to be remembered and the third bore the text ‘The joy of the Lord is your strength’.

Opposite the tents was a stand for the sale of tickets,presumably meal tickets, ‘where there were also vended photographs of the aged pastor in various sizes, for which there appeared to be a very great demand.’[2]

The smaller marquee was where the services were held. The ministers and speakers sat on a raised platform which had a reading desk for the Bible and other books. The singers sat in front of this platform.By the time the service was due to commence at 10.30am, all the seats had been filled and standing room was found with difficulty, A local newspaper reporter gives a typical Victorian vivid description of the congregation: ‘Gay and handsome ladies, tastefully arranged, and all in the bloom of youthful loveliness,fairy-like costumes, lent quite a picturesque and cheering appearance to the assemblage. Many smiling faces, and rosy cheeks, and warm hearts^, and zealous love of their Pastor were there, to greet the rev. gentleman, who had for half a century taught them of the way of truth and holiness.’[3]

Punctually at 10.30 am the service commenced. It is interesting to note .that in those days the congregation did not sing the hymns, probably because most could not read. Someone would read the hymns and then the choristers sang them and most of the congregation joined in the tune.The reading was Psalm 122 and the sermon was preached by a Mr. John Foreman of London, a leading Baptist minister of the time.’[4] After the sermon,which concluded the service,Mr. Foreman warned the assembly of people of the dangers of pick-pockets!

Following a prayer of thanks from someone at the table set apart for the ministers and deacons, dinner was partaken of. A note on the back of the photograph of the Jubilee tents, tells us that ‘355 gentlemen,271ladies, dined under these tents.’

The afternoon service also started punctually at 2.00pm. The main reason for this meeting was the presentation of the Testimonial toMr.Murrell. This was duly presented to him, following his address which lasted for about an hour and a quarter. The testimonial presented consisted of a silver cup inside of which was a purse containing one hundred gold sovereigns.The cup(now on display in St. Neots Museum) is elaborately chased and was designed by a Mrs. Barringer of St Neots. In bold relief it represents the baptism of theLord in the River Jordan and bears the reference of Matthew 3 verses 17and 18.(But if you look at Matthew chapter 3 you will find it only contains 17verses!The reference should read verses 16 and 17). Mr. Murrell was also reported to have received £20 from other churches.

Following a hymn, the congregation retired for tea. A second note on the reverse of the Jubilee tents photograph states ‘1,776 tea tickets sold at Jubilee’. According to the local reporter the waiters and attendants did a marvellous job at executing their tasks speedily and well; so much so that they ‘looked quite fagged out at the end of the matter.’[5]

At 6.00pm the evening service commenced during which a former member of the church at St. Neots gave his testimony. As there were so many people gathered there were some ‘who could not possibly get within the sound of the voices of the speakers’6,so it was proposed that someone else should address these from another part of the meadow. Mr. Dickerson was chosen for this task and he addressed 700to 800people from a wagon. The meeting ‘gradually broke up’, hinting at the reluctance of people to disperse at 8.00 p.m. so that folk could catch the special train to London leaving at 8.30pm. After a little delay, they arrived at Kings Cross shortly before 11.00pm.

So ended a day that the people of St.Neots had never experienced before or since. What a wonderful time it must have been!

[1] ‘Mr. Murell’s Jubilee, St Neots’ 22nd May 1860 issued as a supplement to the Hertfordshire Express