From time to time we have surplus secondhand books available for sale. available titles are given below. Prices do not include post and packing and all enquiries should be directed to our publication sales.

Our 2018 Annual Lecture The Strict Baptists at the of the Great War by Judith James is now available in printed form as Bulletin no. 45

John Gill: Preserver and Reformer of the Particular Baptist Churches

A video of the lecture and a separate audio file can be found here.

In April 2018, the Society’s library was moved to the Evangelical Library at Bounds Green, London. However, we have not completed cataloguing the items into their new locations. This will be an ongoing process. In the meantime, the full catalogue can be found here and those items that have been re-catalogued will be found on the Evangelical Library website here. 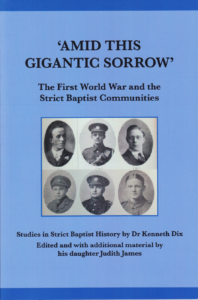 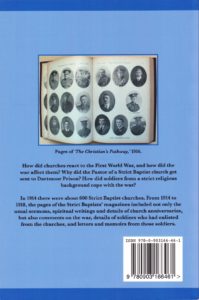 How did churches react to the First World War, and how did the war affect them? Why did the Pastor of a Strict Baptist church get sent to Dartmoor Prison? How did soldiers from a strict religious background cope with the war?

In 1914 there were about 600 Strict Baptist churches. From 1914 to 1918, the pages of the Strict Baptists’ magazines included not only the usual sermons, spiritual writings and details of church anniversaries, but also comments on the war, details of soldiers who had enlisted from the churches, and letters and memoirs from those soldiers.

With a foreword by John Briggs, Emeritus Professor, University of Birmingham, Past President of the Baptist Historical Society.

Strict Baptists in the Early Twentieth Century: an Introduction
Prologue to War
The Coming of War
Prayer Meetings
The Progress of War and the Churches
The Magazines
The Churches
Strict Baptist Societies in Wartime
The Strict and Particular Baptist Society
The Missions
Other Societies
Sunday Work
Provision for the Troops
Conscientious Objectors – and Ministers
The Work of the Northern Union
Joint Efforts
Rolls of Honour
Letters Home
The End of the War
And Afterwards
Conclusions